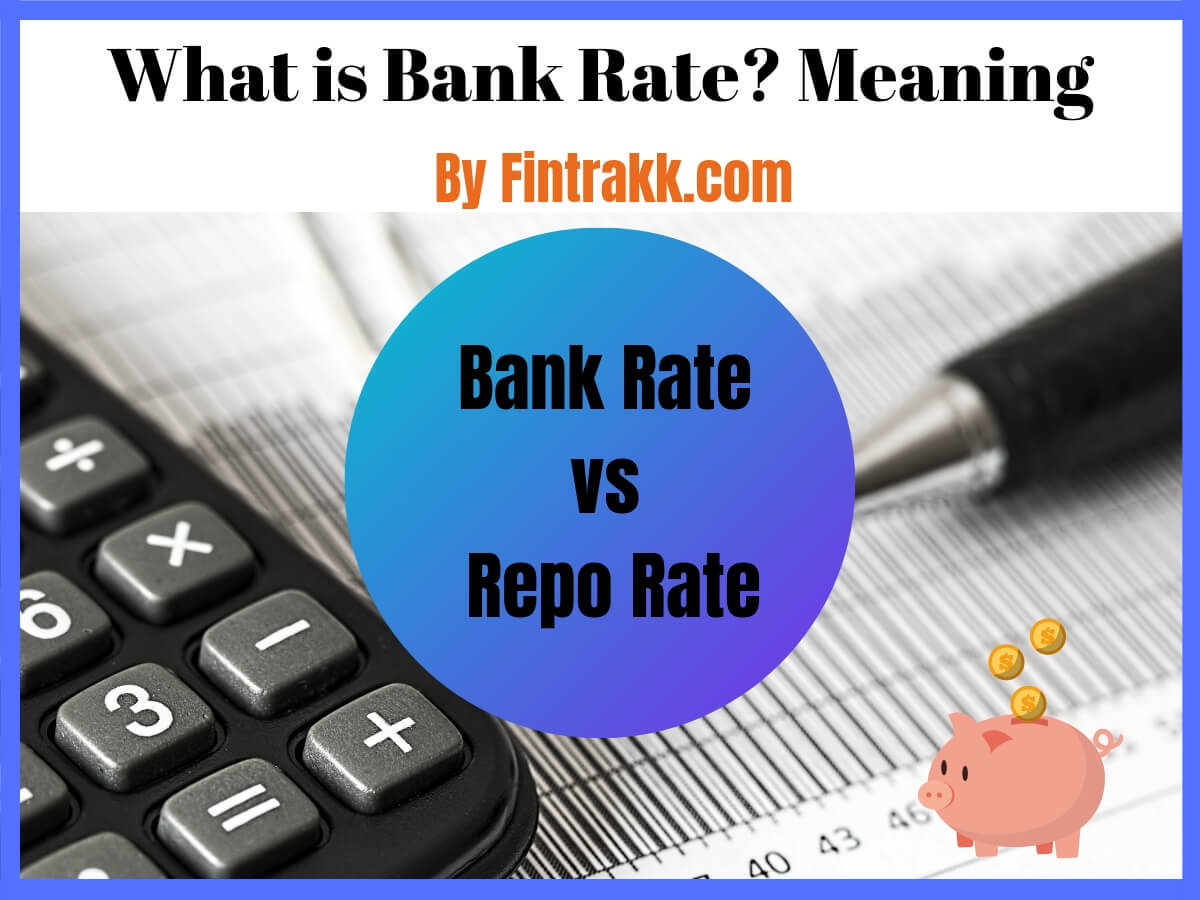 We have discussed a lot about different finance and investment topics in our earlier posts. This time we take you back to some basics of the banking sector. So, you’ll gain information on What is Bank rate in India? What is Repo rate? You’ll basically understand the meaning of these crucial interest rates. Also, read about Bank rate vs. Repo rate and their key differences. And, all this explained in a simple manner!

Let’s get started with the minute details about the borrowing and the lending activities of banks in India.

Firstly, have a look at the definition of bank rate. Investopedia defines “Bank rate” as:

“The interest rate at which a nation’s central bank lends money to domestic banks.”

In India, the central bank being the RBI and domestic banks comprise of other commercial banks.

What is Bank Rate?

Bank rate is the interest rate which the central bank i.e. Reserve Bank of India (RBI) charges for lending funds to commercial banks. Simply put, bank rate is the official interest rate at which RBI offers loans and advances to the banking system including banks or other financial institutions.

Bank rate is also referred to as the “Discount rate”. This sends a signal to the banks regarding the interest rate policy of RBI.

In simplest terms, the lending rate at which commercial banks borrow from central bank without providing any security is called bank rate. Hence, no collateral is involved while charging bank rate.

Do you know that a rise or fall in bank rate can affect you as a loan seeker? But, how is it possible? Let’s analyse this point quickly.

So, if the the RBI increases bank rate in India, what does it imply?

This means, the cost of borrowing for banks shall increase thereby reducing credit volume and vice versa. And, this actually leads to decline in supply of money.

Moreover, the banks borrow funds from the central bank and further lend it to customers at a higher interest rate. This is how banks make profits.

Now, if bank rate rises, the borrowing cost for banks increases. Therefore, the banks will start charging higher interest on loans to retail customers in order to reach their break even.

Ultimately, this high interest impact shall be passed on to the end users or loan seekers like you and me. And, if you go and apply for loan in such a rising bank rate scenario, you’ll get an expensive one.

On the other hand, a cut in the bank rate shall reduce your interest outgo in future. e.g. If you have a floating rate home loan, you’ll get to see downward revision of interest rate ahead.

An important point to note here is that, Bank rate is different from Repo rate. In fact, bank rate is generally higher than the Repo rate.

As discussed above, the bank rate is the rate at which banks borrow money from central bank without any collateral or repurchase agreement.

Whereas Repo rate is the rate at which commercial banks borrow money from central bank by selling government securities with an agreement to repurchase them on a given date and at a pre-determined price. Therefore, the rate of interest which RBI charges while banks repurchase securities is called Repo or Repurchase rate.

As per Wikipedia the definition of Repo rate is:

“Repo rate is the rate at which RBI lends to its clients generally against government securities.”

Usually, banks go to the apex bank i.e. RBI in case of a financial crisis. So, repo rate is the rate at which RBI lends money to other banks in the event of any shortfall of funds.

Do Enjoy Reading  How to Choose a ULIP Plan in 7 Easy Steps?

To summarize, here is a table highlighting the key differences between bank rate and repo rate:

In October 2020, the Repo rate was further held at 4% only by RBI in line with the aim to achieve the inflation target.

Cheer up!! This is some good news for consumers. This implies that banks will pass the low borrowing cost over to their customers. So, you’ll get affordable and cheaper loans.

Since, a rising bank rate displays the tightening of monetary policy of RBI. This is a common measure adopted to control liquidity as well as inflation in the market.

To conclude, we can say bank rate and repo rate are two powerful instruments in the hands of RBI. By adjusting these two important interest rates, it can actively keep a check on 3 significant factors in an economy:

These were interesting facts about bank rate and repo rate in India. Any important point you wish to add here? You can do so in the comment section below.

Are you anyways preparing for a bank job interview? “Bank rate vs repo rate difference” is one of the most common banking interview questions that candidates usually face. So, better have a thorough knowledge on it.

Now, that you are clear with the concept of bank rate, you can figure out what’s going on in the banks lending rates around you. And, the next time you read about the terms, “bank rate” and “repo rate” just recall these banking concepts. What do you think about the present bank rate and repo rate in India? Feel free to share your opinions.

3 thoughts on “What is Bank Rate in India? Meaning: Bank Rate vs Repo Rate”